My goal with mande plants is to teach about medicinal and edible plants, show how to grow these plants, where to find these plants, and how to use these plants. There are many useful botanicals in our world. I will growing seasonal crops and perennial edibles using organic methods as best as possible. One of my long term goals is to grow a temperate food forest garden. As I grow new plants and harvest them I will be sharing photos and details on this blog. All photos on this blog are taken by me. If you like this blog and you would like to help me further my research you can use the paypal donate button on the right. All donations will be used to buy tools, plants, seeds, and pay for expenses needed to develop gardens.

What is Wild Ginger?

The plant commonly referred to as Wild Ginger belongs to the Asarum genus in the Birthwort or Aristolochiaceae family. The Ginger you buy in stores is in the Zingiber genus in the Ginger or Zingiberaceae family. Wild Ginger gets its name from the smell and flavor of its roots and leaves, a ginger/pepper odor and favor. The specific Wild Ginger I will talk about and have photographed is Asarum Caudatum, which is native from British Columbia to California. 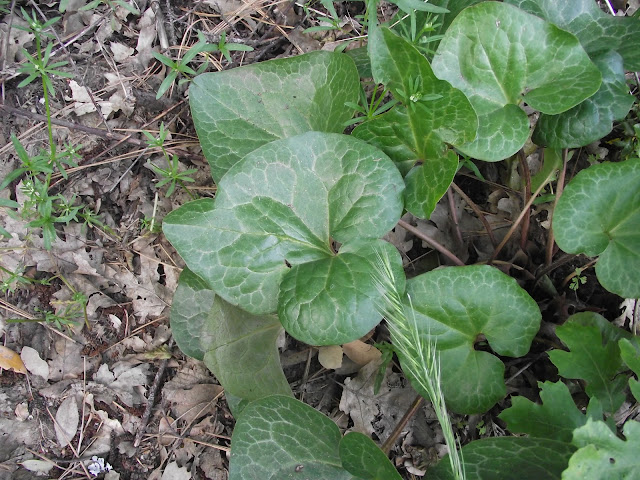 Caution is advised when using any plant in this genus, as some have been reported to have some level of toxicity. The roots of this plant may be used as a ginger substitute. They can be harvested all year round but are best harvested in the autumn. The Leaves may be used as well but they do have a stronger flavor and should be used in small quantities.

The root has some laxative properties. It may also be used to help improve digestion, appetite, and as a general tonic to the stomach. The whole plant has analgesic properties as well, which help to relieve pain.

As with all plants, respect must be given to this plant when harvesting. Because the root is what is mainly harvested the plants life is whats taken. Remember to harvested only what is needed not exceeding a third of the plants that grow in the immediate area. 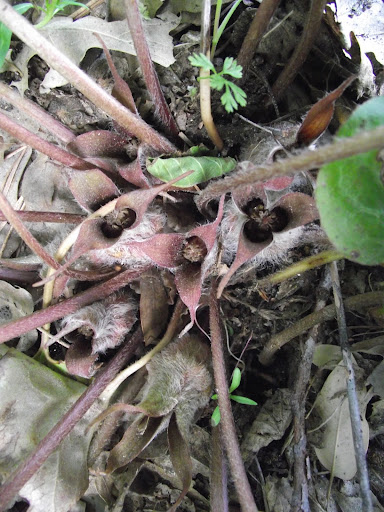 Posted by Steve Flanagan at 8:42 AM